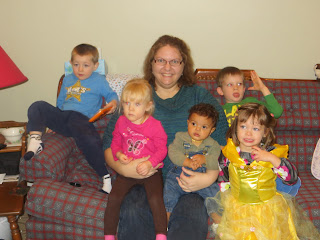 With Mother's Day being last week, I was busy thinking about who I could send messages to that day. I sent them to many of my "mommy friends", but my thoughts drifted to the many women I know that have not physically had children or even been able to adopt children. Yet I know their hearts are one with mine. They have held and cared for another woman's child and have cried over that child; loving them fiercely!  I have seen women fight passionately for a child not their "own", protecting them, defending their rights, sheltering them, holding them as they pass into the arms of Jesus.

Why do some women do this? Why do some Adopt? Foster? or Work in orphanages and hospitals with abandoned babies? Because they/we know that these babies are just as precious as any baby we could have biologically. Because God has given us a command that our heart has taken an allegiance to serve. I know so many woman who have taken up this calling even when their hopes of being a mother has not come to pass yet. This post is for them!

These woman are ones that we need to look up to and emulate their self-sacrifice with our own little ones. May I encourage you in something? If you know someone like this~ offer her your support and help. Her job is not easy. If you have been feeling a tug to help the fatherless~ don't keep pushing it aside. Find out what you can do! Whether it is sponsoring a child internationally, becoming a foster parent or just supporting ministries like this one you will. never. regret. it! Because there is nothing more rewarding that being a Mother:)

~Mona
Posted by Project Hope for the Children at 10:33 PM 0 comments

In my past Posts, I mentioned my friend Abbey, who accompanied me to the hospital the first day. I asked her to write about what she felt on her first day. Incidentally, she remembered things that I had forgotten so I enjoyed reading it, as well! Thanks Abbey!

I had been warned. I had watched the 20/20 episode over and over again. I had spoken directly to a handful of people who had been there before. I had read countless blogs and websites. But nothing prepared me for what I experienced my first day at the children’s hospital. I left utterly horrified.

As we walked from the parking lot to the guardhouse located on the hospital perimeter, I remember being the most worried that we weren’t going to be granted access into the hospital. The hospital staff was extremely skeptical about giving outsiders, especially Americans, an insider look at the goings on behind the closed doors. I’m not exactly sure what Michelle (the American missionary we were working with that summer) said to the guard in Romanian, but I can assure you allowing us access was of no benefit to him since as we did not offer him any bribes or money to let us through. Finally, after much hesitation, we were miraculously allowed to enter.

As I walked through the double set of glass doors, I remember thinking how eerily quiet it seemed. Where were all the people? And why were all the lights off? Didn’t they have electricity? And why was it so hot? I didn’t expect air conditioning but couldn’t we at least open a window? (I later learned Romanians don’t like to open windows because they believe the cross-breeze can cause illness).

As we made our way up the hospital stairs I couldn’t believe that we had to step around cigarette butts and broken windowpane glass. Wasn’t that a hazard to patient safety? That would never fly in America!

Alas, we arrived on the 7th floor – our home away from home for the rest of the summer. The walls were sea-foam green, the curtains dark brown and heavy, the rubber tiles on the floor were pealing away, cockroaches were scurrying around the baseboards, the white paint was chipping off the metal cribs, the en-suite bathrooms had scant running water, no soap, and barely usable cabinets.

The babies…oh, the poor babies were all lying there lifeless. I didn’t hear any of them cry. It was as if they were far beyond that…they had already reached a point where they knew their cries would get them nowhere so they stopped trying. Some of them also shared a tiny crib with another abandoned baby. They were covered in mosquito bites and dripping sweat from head to toe. It was SO HOT!!!! They were literally dressed in rags and wrapped in about 3-4 inch thick cloth diapers (which forced them to lay 24 hours a day, 7 days a week with arched backs). It was obvious the purpose of the layers and layers of cloth was so that the babies could lie there for 12 hours in soiled diapers but not soak through the bed sheets.

Not only were the babies not stimulated by sound, touch, sight, or smell, but when it came time to feeding, they were all fed via glass bottles propped up by the bed sheets. If the bottle slipped or if the baby wasn’t able to catch all of the rice cereal/milk that was coming out of the enormously large nipple, they were simply out of luck. Feeding time was over and they’d have to wait again until the next scheduled feeding. I also witnessed toddlers attempting to rock themselves to sleep since they knew no one else would. And I saw kids slamming their heads as hard as they could against the metal cribs over and over again just so that they could get some sort of stimulation.

The tears started to well. It was all way too much and way too much to take in at once. But I KNEW I couldn’t cry. I couldn’t let the nurses see me upset. If they did, they wouldn’t let me back, and these abandoned babies needed me and all the loving they could get.

I left the hospital that day with a very heavy heart but excited at the same time for how God was going to use me that summer. I knew he had incredible plans in store… 

Posted by Project Hope for the Children at 12:57 PM 0 comments

May is the month that has a lot of meanings for me. In NY, where I live, it is the beginning of Spring, it is the beginning of fundraising for Project Hope for the Children and it is also Foster Parent Appreciation Month. For my husband and I that has a great deal of significance as we are foster parents and love the opportunity to work with birth parents, who have lost their way and their children. Currently, we do not have an extra little one in our home as our last baby went home in January. We are recharging and concentrating on our two preschoolers, but soon we will receive a call and have another one to love on...

As I was pondering this earlier, it struck me that all of you, who have donated over the years are honorary foster parents. You might not be able to take the babies in Romania into your homes, but you have fed them, clothed them, rocked them and showed them Jesus' love.  "And whatever you have done for the littlest of these,you have done for Me", said the Lord.

So I want to thank you for all you have done over the years and encourage you to keep on! I believe this Ministry is important and your help is what makes it so powerful! Please consider donating this month. There is a PayPal Donate Button on the Home page or you can go to the Donate Section  for more information.

Mona
Posted by Project Hope for the Children at 9:11 PM 0 comments