He lay in the corner crib, propped up, eyes open and staring. All was quiet until choking and gurgles filled the room. Frightened, my mama instincts heightened, I looked over quickly to see his eyes bulging; struggling to breathe as dark phlegm was expelled from his mouth. Alina hurried to him; helping him upright and wiping the phlegm from his mouth. I watched her tenderness with him, but knew her heart because my own was going through the same struggle.

You see little Benjamin has a lung disorder and a brain disorder. Neither look good long term. Days before when I had entered the room, I had greeted all the babies. Benjamin caught me though. Each breathe was a struggle for him, eating an arduous ordeal and yet he would try to smile and every once in a while emit a little sound as he tried to communicate; tried to thank the loving hands that cared for him.

I did not want to get attached. I have been down that road before and it always means pain. Because you know that one day this little one will go and join the Maker that created him and you will be left with a hole in your heart. And yet, this child has value... Alina knows that too. Benjamin did not ask to be born this way or to live sometimes with his Roma parents and sometimes at the hospital, yet he still finds it in him to smile, to gurgle. If he can be that resilient then so can I.

So I dried my tears and went over to thank him for the lesson learned once again... 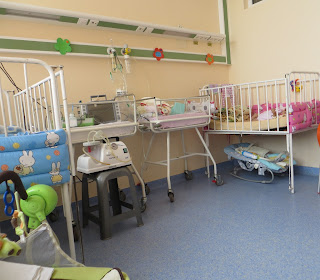 *I am so thankful that this Ministry (that the Lord has given me) focuses on the value of people. It doesn't matter their age, health, culture or sex; it feeds them and loves them and shows Jesus to them!
Thank-you for being a part of that!
Mona
Posted by Project Hope for the Children at 4:00 PM